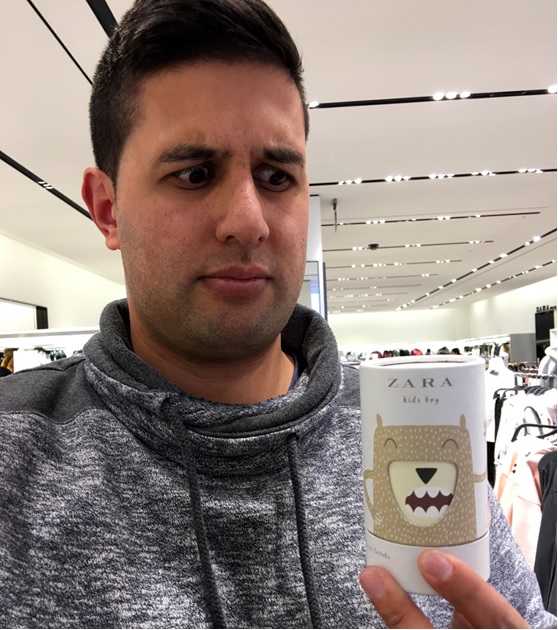 By: Mark Thomas from  TheHonestFather.com

It was payday for me last Thursday so this weekend I’m feeling rather flush – we decided to buy Evelyn some clothes so she would at least have some that fit her. We ventured out to the Trafford Centre (yes, the same place Kathryn went into early labour!) to buy some garments that, in all honesty, were probably made by children not much older than Evelyn…

We agreed before we left that we just needed to get a winter coat and some boots. That’s all we needed and that’s all we had a budget for, simple right?

An hour after arriving I was stood on the second floor of the shop holding four t-shirts, a coat, boots, a hat and a dress. The only thing dropping faster than my bank balance was my face! I knew this would happen though – it always happens. I have stupidly low expectations of how much clothes cost for children and Kathryn has stupidly high expectations of how many clothes children need.

Like every Sunday, Evelyn was staying over at my parents’ house. This meant that on this particular shopping trip I had no distraction. I was forced to look enthralled as Kathryn explained why these boots didn’t go with this cardigan. Apparently the only solution was to throw more money at this mismatching problem. We were in this shop for 90 minutes.

We were waiting at the queue for much longer than it should have taken to serve the four people waiting. The staff at the checkouts were going through this painful “HIII, HOW ARE YOU? What have you been up to today? What are you doing with the rest of your day?”. This really pisses me off,  I just want to get served and move on with my life. I don’t need any of this smalltalk!

It was when I was quite literally rolling my eyes that they fixed on the fragrances next to us. Something didn’t seem right with them, they were obviously fragrances but they had Frozen characters on the bottle. There was also Batman, Spiderman…Paw Patrol!

“Surely they can’t be for kids, can they?” I thought to myself. “What kid needs aftershave or perfume?”. I took a closer look, they even had baby perfume.

What could kids possibly need this for?! 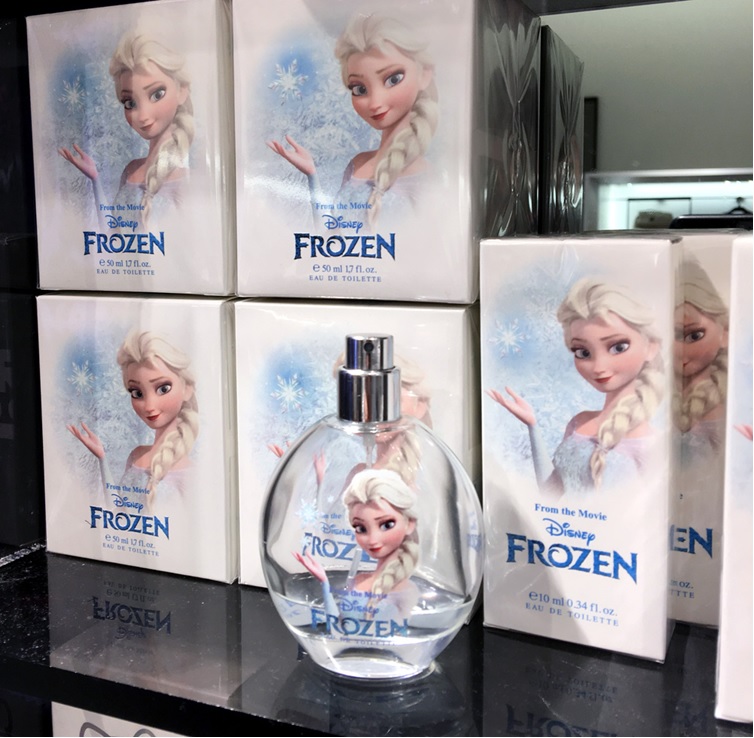 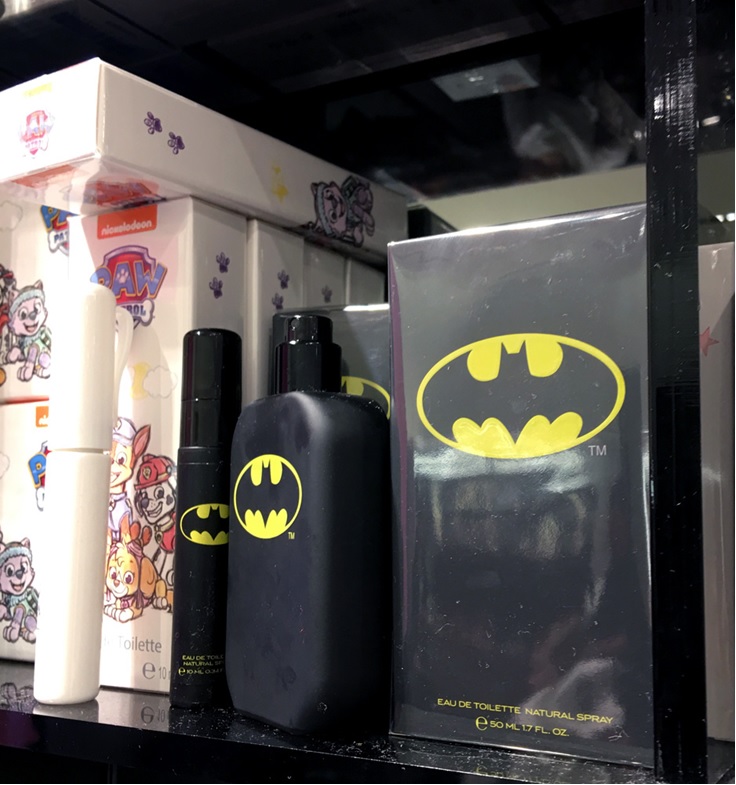 They even have Batman and Paw Patrol ones!

Please tell me if I’m being uptight here or if you think I’m just out of order, but this really got to me. Why would kids need fragrance? On what planet would they have a reason to be wearing it? Apparently this has been available for quite some time now too, though I’ve never seen it.

So why did this bother me? It got to me because of my perceived purpose of perfume. I’ve always been under the impression that you wear it to attract – in fact contains pheromones for that exact reason does it not?

I Googled the purpose of perfume, for argument’s sake. I knew I’d be arguing this at some point so best to be prepared. I came across a site that will tell you the purpose of all kinds things – www.purposeof.com.au. This is one of their stated purposes of perfume:

“Perfumes trigger the sexual appetite. Most perfumes for women and men contain a list of pheromones, type of hormones that stimulate sexual desire. Women that use seductive perfumes stimulate greater sexual desire in men, and have better self esteem.” 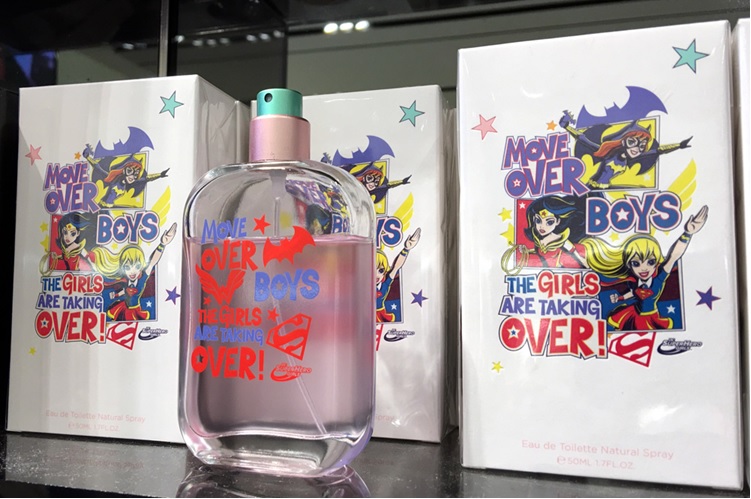 There is even a Paw Patrol fragrance. Paw Patrol! According to childrens’ toy and media review site Parents’ Choice, Paw Patrol has a target audience of 2 – 5 year olds.

Are we targeting fragrances at 2 – 5 year olds? I sincerely hope not.

I see your point, but…

After some thought, and after discussing it with Kathryn, a few different viewpoints entered (and were forced into) my mind. Treat this as my conclusion and train of thought in one.

Firstly, we give our children toy guns. That’s potentially worse isn’t it? Granted, some of these are unrealistic “super plasma laser”-type weapons, but the aim is still to point, shoot and kill. We let our children play games where even the most childish of aims is to “kill the bad guys” without “losing all your lives”. Is that just gaming nomenclature or something worse? It’s too common to think about these days.

Secondly, my daughter, Evelyn, has countless dolls. She even has one that will cry, take a bottle and wet itself so that it needs changing. We are training children to be parents at a very young age these days. Evelyn still throws it down the stairs and stuffs it down the back of the couch so she’s hardly about to win Mother of the Year Award, but still…

Thirdly, Evelyn will also regularly put her pretend makeup on (and put real makeup on me as seen in this video). She will sit in front of a mirror with her classic wooden makeup set and apply each part separately, having already learnt at two years old what they’re all for and at what point to use them. The purposes of makeup are largely attraction-based too, right? So isn’t this very similar? Something tells me I should be just as bothered by this as I am the perfume but I stop myself, I see this as “normal” play time for a little girl.

Finally, if children are going to be wearing perfumes, isn’t it best that they wear the one that’s been designed for their age group? Surely it will contain fewer chemicals, no pheromones and no feacal base note (yes, you read that right. Expensive stuff like Chanel No. 5 has feacal base notes. Google it!).

So where do you stand on it?

Well, I’m conflicted if I’m honest. Initially I looked at it with disgust as I saw perfumes as an attraction-enhancing thing. I have to step back and think about things from a child’s perspective though. I’m so used to the use of fragrance from my own point of view that I never gave thought to how Evelyn sees it. It’s new to her, exciting, fun – it’s a way to do what mummy and daddy are doing and I totally get that.

Kathryn told me how she would be given the old perfume bottles from her great aunt, and fill them with water for her play makeup set. She’d also mix rose petals and water and call it perfume. It’s such a sweet thought for me to imagine her doing that as a child.

I think I understand what was initially responsible for my distaste at the concept of child-perfume; I have a daughter. I’m pretty sure I wouldn’t have looked at it in such an unfavourable way if I had a son. In fact I would probably either shrug or laugh it off. Perhaps the issue is with me and it’s a sign of overprotectiveness? Perhaps.

Having relaxed a small amount on the matter, I can still say that I will not be buying Evelyn any fragrances any time soon. But I say it with a more balanced view than my initial “WTF” reaction afforded me. It might just be a matter of time – she will want them soon enough, but I’ll see how the battle goes between my disdain for them and her desire to be like the rest of the kids! 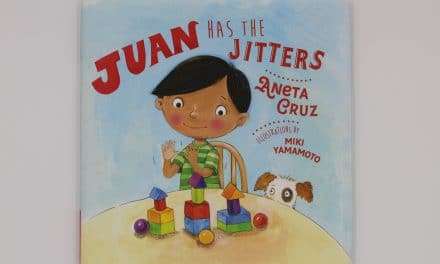 Juan Has The Jitters 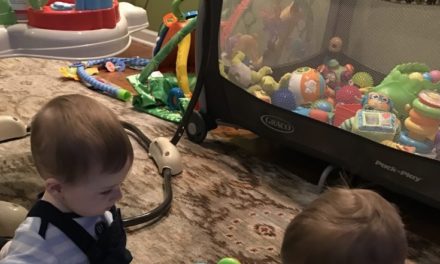 Are You Keeping Your Kids Up Too Late? | The Baby Spot 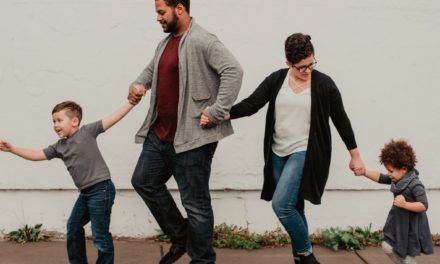 How To Be The BEST Advocate For Your Child