Ultimate Babymoon in Victoria, BC 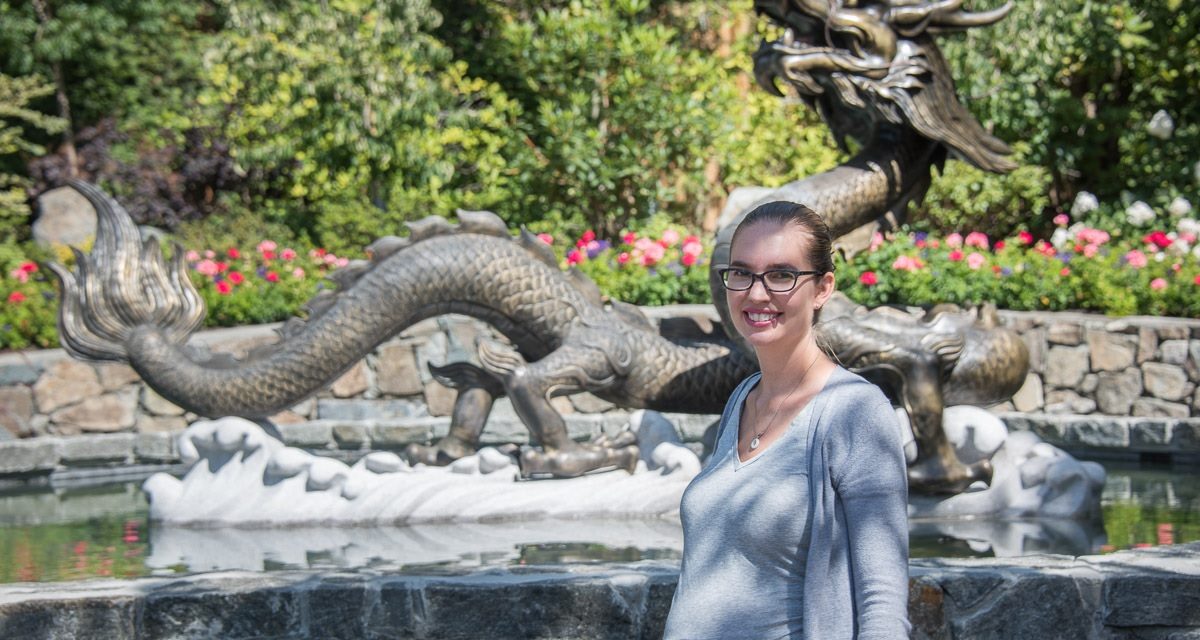 When my Mom offered to watch our toddler for a weekend, we figured it would be perfect timing to go on a babymoon. We didn’t get to do one when I was pregnant with our toddler, so this was a special treat!

The drive up from Seattle did not go as planned. Thankfully, we listed to Kunal Nayyar’s audiobook for the drive, which kept us laughing and in good spirits. We decided to take a ferry instead of driving down to Tacoma and then over to get up to Port Angeles. We didn’t realize how long the ferry line in Edmonds would be and we ended up in line for 2 hours before we were able to get on a boat. This meant that we missed the ferry from Port Angeles to Victoria that we had planned to go on and had to wait another 4 hours. This was a bummer, but it meant that we got to have a leisurely dinner in Port Angeles and then continued listening to our audiobook in the car before walking onto the ferry. 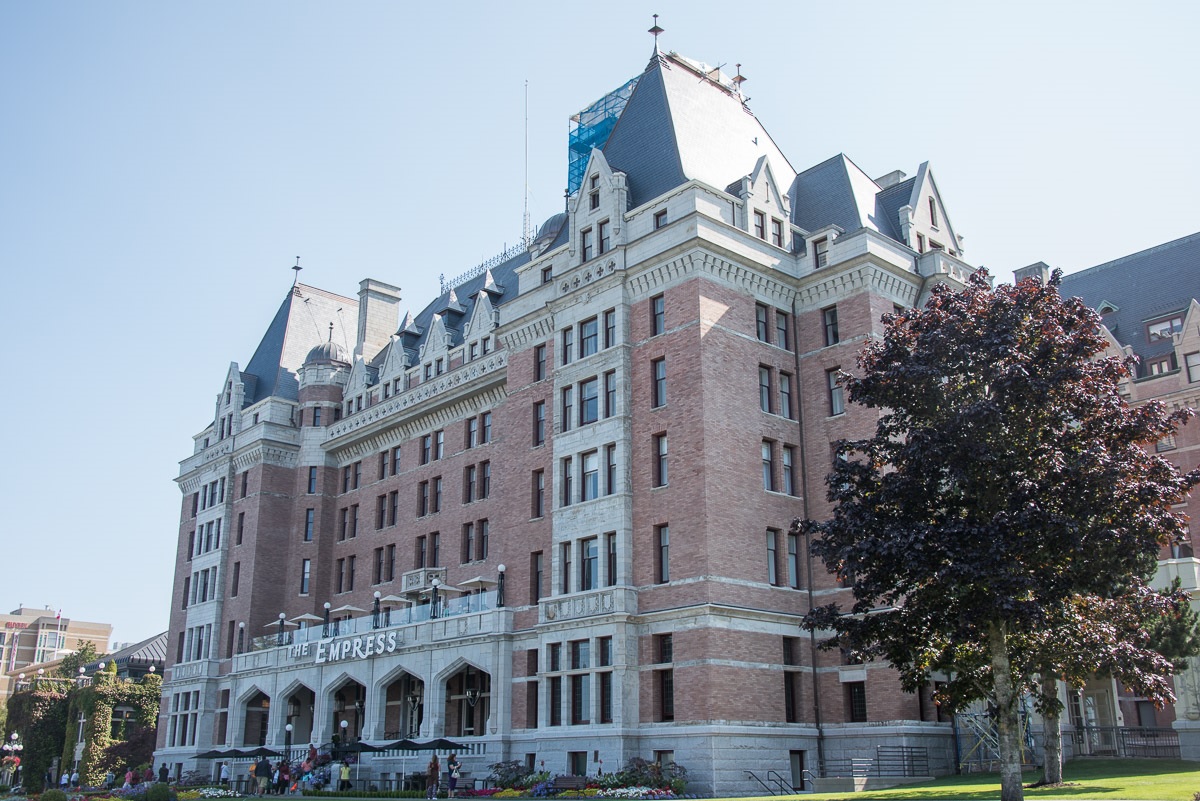 Day 1:
We actually slept in until 8am, which is really late for us! It was fantastic to just relax and think about what we’d like to do. My pregnant tummy started rumbling, so first stop was breakfast downstairs at the Q restaurant. I had delicious Banana Bread French Toast and Darren had very fresh Eggs Benedict. It was a fantastic way to start our day.

Next, we boarded the Greyline Victoria Sightseeing Hop-on Hop-Off Tour bus where we watched the Water Taxi Ballet perform before heading on our tour. The bus tour took us to Chinatown, the Wharf, Beacon Park and all over Victoria. We got off at Craigdarroch Castle, which was a beautiful home that has had major restoration. It reminded me a lot of Iolani Palace in Hawaii, as they are slowly collecting items that use to be part of the estate. 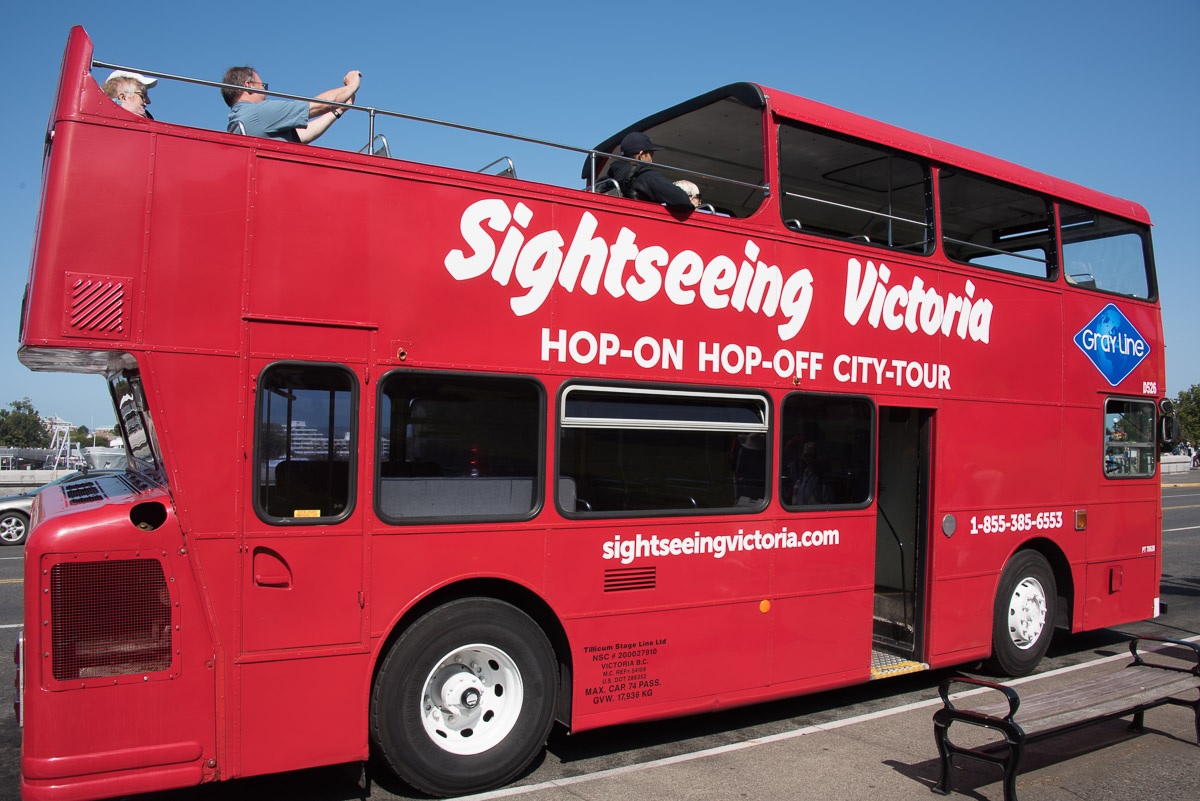 After we toured the Castle, we caught a taxi to Abkhazi Garden because we had a 1pm Afternoon Tea reservation. The garden is very small and intimate. We strolled around taking photos before sitting down at our table. We sampled the Royal Abkhazi tea that was made especially for the garden by Silk Road. It was so tasty that we ended up buying some to bring back home. The Afternoon Tea menu was fantastic! We weren’t even able to finish the dessert portion because we were so full. Just being able to taste these yummy treats while sitting outside in the sunshine soaking in the private garden felt like such a special moment.

When we could eat no more, we called a taxi to take us to Oak Bay Marina, where we heard the sights were picture-worthy. We walked around looking at the water and the San Juan Islands. We also chatted with an older couple visiting from the Channel Islands and it was fun to hear what they thought of Victoria and Vancouver. After we strolled around the harbor for a bit, it was time to hop back on the tour bus and continue seeing the sights on the way back to the Fairmont Empress.

We got off at the Fairmont Empress because the bus was going to wait there for awhile before starting the next tour. I needed to use the restroom so we headed into the hotel. Darren thought we should check out the hotel spa and see if they had any availability. We were able to reserve treatments for later that night. In the meantime, we decided to walk up Government Street and do a little bit of shopping and people watching.

When we were done shopping, we headed back to the waterfront and grabbed a water taxi through Victoria Harbour Tours and toured around the harbour. Our guide was very friendly and pointed out interesting facts along the way.

We disembarked the boat and figured we’d check out the Royal BC Museum before heading to our spa treatments. The museum was just steps away from both the harbor and our hotel, which was extremely convenient. They had a Mammoth exhibit and that was our first stop. We really enjoyed seeing the life-size animals and the detailed displays! The rest of the museum reminded me a lot of the Museum of History and Industry in Seattle, which was very cool.

We finished at the museum just in time to head to the spa. I had an amazingly relaxing facial and Darren had a deep-tissue sports massage.

By the time we finished at the Spa, it was 9pm and we decided to eat dinner at the Q restaurant again so we’d just need to head upstairs to go to sleep after. The food was again very delicious and the staff members were incredibly friendly and helpful!

It was a long day, but so much fun and very rejuvenating!

Day 2:
We decided to take the 10am CVS Tour bus to Butchart Gardens since it also included a stop at the Butterfly Gardens. The timing worked out so we were able to get all cleaned up and packed and check out of the Fairmont Empress. We left our luggage with the porter so we could retrieve it on our way to the Coho Ferry. At that point, it was 9:30am, so we walked up the street a couple blocks to Sam’s Deli to grab breakfast to go. It’s a really cool deli with all kinds of breakfast and lunch options that are easy to take out. It would be a great stop for a picnic!

We hopped on the CVS Tour bus to head to the world-famous Butchart Gardens. The ride lasted about 40 minutes and was full of great information about Butchart Gardens and the Butchart Family. When we arrived at the Butterfly Gardens, we checked the time and realized we wouldn’t be able to do both, so we saved the Butterfly Gardens for next time so we could bring our toddler. The drive into Butchart Gardens was bumpy because the concrete was original and had spaces in between each slab for expansion/shrinkage. I didn’t mind the bumps because it reminded us how the Butchart’s made their fortune.

When we entered the Gardens, we were transported to another time. Even the courtyard was laid out very nicely. We grabbed a map and they had a general route that we could follow. We walked toward the Sunken Garden first. As soon as we turned the corner, I was blown away! The Sunken Garden really pops out and I felt like I had entered the Secret Garden because it is so hidden. It was absolutely stunning! It had everything from water features to beautiful flowers to views from various vantage points. We weren’t sure how much time we could spend there, so we went a bit quicker than we should have and headed up the Carousel.

The Carousel was really adorable! We learned on the CVS Tour that each animal on the carousel was from one of the family’s travels. I really loved this concept because it made it more personal. It also reminded me of the carousel at Woodland Park Zoo in Seattle, especially because it’s enclosed in glass, which is perfect for Northwest weather. When we come back with our toddler, we’ll be sure to take a ride! 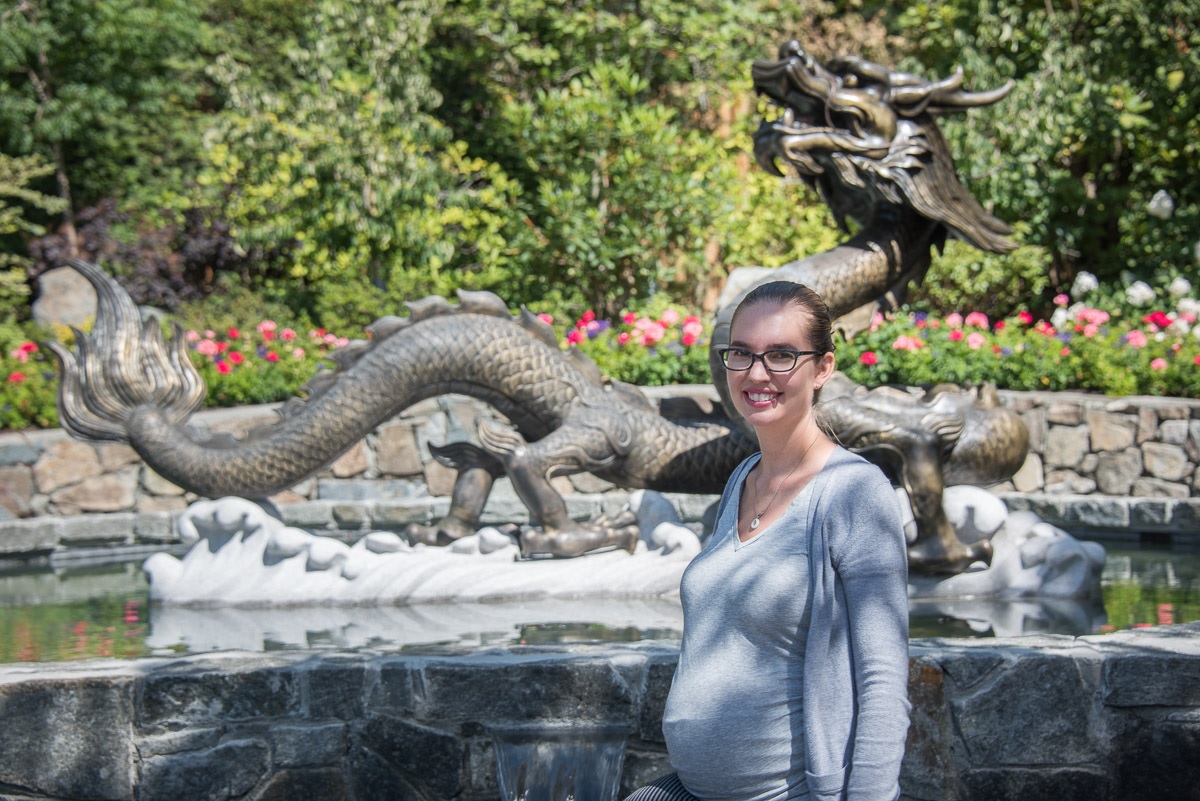 Then we headed to the Rose Garden that smelled lovely! It reminded me a lot of my Grandma, who used to grow stunning roses in her garden. I was surprised that the roses were still in full bloom since it was a bit late in the season and many other rose bushes I’d seen elsewhere were fading fast. We liked how this garden highlighted the open space so we could see a lot of it as we were walking around.

The Japanese Garden was simply serene. It had everything we’d expect from a Japanese Garden. We had learned on our CVS Tour that the family had been given a hundred Cherry Blossom trees from the emperor of Japan when they visited more than a hundred years ago. A Japanese gardener also came back with them and created the Japanese Garden. It was through this garden where people could take a boat tour of the cove. We didn’t have time to do it this trip, but it’s a must-do for our next trip.

We ended at the Italian Garden, which was very small and was in a courtyard with a gelato shop. Darren felt compelled to taste the gelato to see how authentic it was. He thoroughly enjoyed it! Just up the hill, they had several benches for people to eat and soak in the Gardens. We spent awhile here just catching our breath and then headed to the bus area for our bus back to the hotel.

We arrived back at the Fairmont Empress at 1:45pm and realized we had time to grab a quick bite. The lady at the Spa had suggested the Tapas Bar in Trounce Alley, so we quickly walked up there. When we entered, we let the waiter know we only had 30 minutes to eat and he gave us recommendations for quick bites and immediately brought us our check. We had the most amazing mango balsamic mushrooms, coconut lime mussels and bacon wrapped dates. It was the perfect post-Gardens lunch! We quickly paid the bill and sped back to the hotel to grab our luggage and board the Coho Ferry back to Port Angeles.

The ferry ride home took longer than expected but we got to see a whale for about 10 minutes of the trip! The whole ferry rocked vigorously as all the people on board rushed to the side of the boat to try to get photos of the whale. It was quite exciting!

The rest of our drive took much longer than anticipated due to draw bridges and ferry lines, but thankfully we started a new audiobook that helped pass the time. We really should know by now that sunny weekends in Seattle will always have traffic delays! 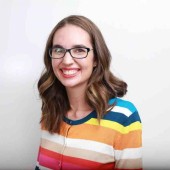 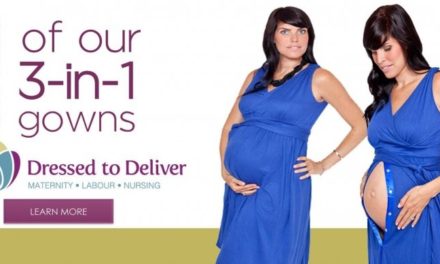 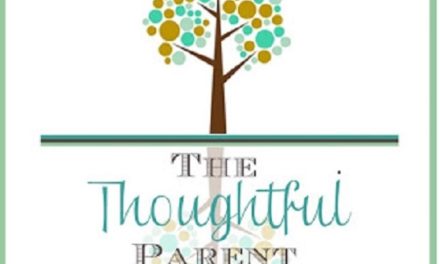 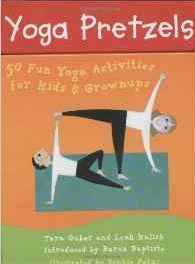 Yoga Pretzels- Work Out With Your Kids! 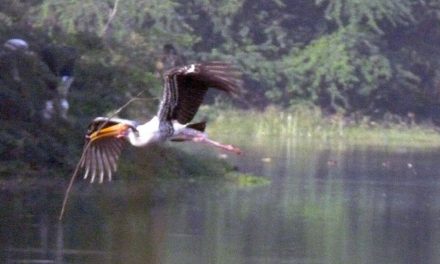 9 Family Destinations Near Lakes In India